The Amby Baby hammock was an invention of necessity. It was created by Ambrose Hooi as a measure to help his daughter who had become an unsettled, restless & colicky baby at 4 weeks of age.

The encapsulating environment of his initial crude version of today’s hammock, along with the rhythm of the rocking, created a comforting ‘nest’ which helped his daughter sleep, grow and feed well. Having adequate sleep brought much joy for their whole family and made their lives easier.

Ambrose’s idea back then was the catalyst for the successful Amby product range that you can buy today. His baby hammock bed, over the last 23 years has grown to be a saviour for many parents and carers all over the world.

Most babies who use the hammock as their bed develop into happy, healthy and contented babies. They are less inclined to be insecure and they do not seem to cry a lot. They are used to long, sound and unbroken sleep – untroubled either by insecurity or discomfort. These are traits that appear to be common amongst ‘hammock babies’. They tend to be ‘easy’ babies and as is the case with most ‘easy’ babies, they are confident and resilient.

We at Amby Baby work hard to maintain our customers’ loyalty and the unrivalled reputation of our products. To this end, Amby Baby welcomes all customer feedback and is always open to exploring new ways in which it can help parents and babies.

We invite you to try the Amby baby hammock for your baby. We are sure you will be delighted. Please read Ambrose’s story below.

My daughter Ying-Li was born in November 1988. The proverbial ‘perfect’ baby, feeding and sleeping well, she was a joy to behold. At about 4 weeks, however, things began to change, with the onset of colic, an often difficult to understand syndrome. She soon became unsettled and restless. As with most colicky babies, sleeping and feeding became a ‘chore’ rather than a ‘joy’. 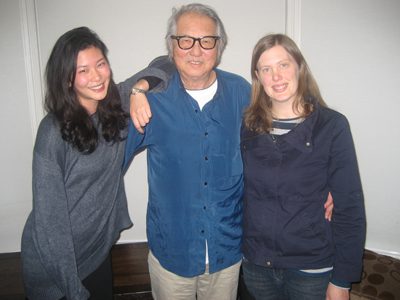 From Left: Ying-Li (Ambrose’s daughter and the reason Amby was invented!), Ambrose-Hooi (Inventor), Trish (Mother of 3 who loved her Amby, and is now the Owner and Managing Director of Amby Baby Hammocks).

The admission that we ‘just could not cope’, a few weeks later, resulted in a week’s reprieve at Torrens House, an Adelaide based hospital for the ‘infantile waywards’ of the world. A Godsend for parents living on the edge.

Her absence from home created an environment of tranquillity that allowed me to ponder leisurely over the question of ‘a cure’ for all this colic! What does a newborn do most of the time? Sleep? Yes, apart from feeding and the other natural things that all good babies do, the newborn sleeps or tries to, most of the time. So he spends most of his early life lying down, somewhere. Could the logical answer to the problem then, be as simple as a bed? A suitable bed for all these young ‘lay abouts’? Perhaps some kind of a ‘nest’ that replicates the comfort and security of the maternal womb may not be too far fetched an idea for a solution! After all, why does the stork deliver the baby in a hammock and not in a basket? Why do baby kangaroos hop back into the pouch at the slightest sign of danger? Why do babies curl up in a corner of a cot to sleep?

With more research into the subject, it became increasingly evident that apart from Western cultures, there are many other cultures that use an alternative bed for their babies. In many countries a little hammock of one kind or another is used exclusively for their newborns. In these societies where nothing ‘natural’ is misconstrued as obsolete, the hammock as a baby bed can be found everywhere, suspended from beams in corridors and doorways, from the branches of shady old trees and on the front or back of mothers working in the fields. Every time you look in on these ‘hammock’ babies, they are asleep, blissfully!

If one begins to examine the make up and structure of the hammock, one is reminded of some sort of an external womb, a kind of a ‘pouch’ that has many ingredients of the maternal womb. In kangaroos and other marsupials, the pouch is both an external and internal womb where the young is nurtured until they are old enough to fend for themselves. This is the supreme place of security, a place where they can simply concentrate on the joys of feeding, sleeping and growing.

The human baby, amongst the most helpless at birth, is no different. To cope with the outside world in their first few months of ‘external’ existence, they must surely be given an environment that has some resemblance to the maternal womb. As he spends most of his time in bed, then he should have a bed that simulates the conditions of the maternal womb. A bed that can provide spatial restrictions or enclosure, tactile touch and rhythmic movements. The conventional baby bed that is available is therefore nowhere near suitable. They are, very simply, adult beds made in miniature and ‘babied’ up with frills. The only problem here is that babies are not miniature adults! They are initially frail and helpless and they need a lot of nurturing and sleep. Their bed must therefore be a place of utmost comfort and security, a bed that is at once soothing and stimulating.

By the time of Ying-Li’s return from Torrens House, I was ready! I had constructed a crude hammock with an old ‘sarong’ suspended from the dining room ceiling by a few strands of bicycle tyre tubes. It was a sizzler of a day, a typical South Australian hot, dry, mid-summer’s day. The trip home from Torrens House was long and arduous and she was in a ‘piggish’ mood- perfect for the much anticipated trial. We took her out of the capsule and put her in the hammock. She screamed. I started to rock her up and down. The screaming stopped . Curiosity took over. She began to look around this strange contraption. She was tired. We kept up the rocking, up down, up down. Soon the inevitable happened. The rhythm of the rocking got the better of her and she fell into a long, deep sleep. From then on, this was her bed. She slept in it till she was almost two.

The rest, is as they say, history. In 1990 Natures Nest was selected to represent Australia at the 1990 International Exhibition of Inventions and New Techniques in Geneva, Switzerland where it was awarded the Grand Jury Bronze Medal. In 1991, it was featured on Beyond 2000.
Ambrose Hooi

Today, many thousands of parents in Australia and Europe have finally come to terms with the fact that for babies, to sleep, grow and feed well, they need a sleeping environment that has at least some ingredients of the maternal womb. The use of Natures Nest by hospitals and child care centres in Australia and Europe is extensive and growing rapidly.

P.S. This was my first and only attempt at ‘design’ and ‘inventing’. I was then an Economics lecturer, more at home with the vagaries of Economic Theories than babies and sleep.

Since then I have learnt a lot about babies, their sleeping patterns and their preferences for sleeping utensils.

A unique womb-like bed proven to:
😴 Solve sleep issues
❤️ Relieve colic / reflux
💪🏻 Be a lifesaver for families since 1989
👇 Website below

The Amby Baby Hammock is a perfect solution for he

Laundry, that never ending job when you have child